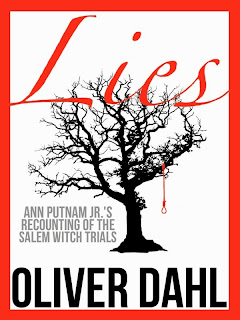 Salem Massachusetts, 1692: Tituba curses two young girls, but Ann Putnam Jr. isn't one of them. In order to help save her friends, Ann develops a plan to accuse the remaining supposed witches of Salem. As the death count rises, each lie buries her deeper and deeper under a curse of her own doing. This tragic experience of guilt, abuse, power, and love gives a first-person view into the spine-chilling months where neighbor turned on neighbor at the word of a little girl.

In this Novella written by Oliver Dahl we learn the stories from the Salem Witch Trials told from the POV of 12 year old Ann Putnam. Oliver Dahl did a great job with the emotions in this book. It drew me in the more I read. The plot had a smooth flow to it and kept me reading. The entire journey was amazingly wrote by a 16 year old.

Born in 1998, Oliver Dahl is the oldest of five children and lives in Idaho. Previous to finishing middle school, The Dreamers had earned him the a spot as one of Idaho's Top 50 Idaho authors (2011). The title of Idaho's Student of the Year (2012) preceded both the publication of Dahl's second novel, The Nightmarers, and the completion of his freshman year of high school. Oliver's books have spent time in the top percentages of books on Amazon.com.Authors like Brandon Mull, Obert Skye, and Richard Paul Evans own autographed copies and have expressed interest in The Dreamers. Dahl is also an awarded musician and engineer. In addition to these accomplishments, he has twice as many Oscars as Leonardo DiCaprio, and has won the Tour de France as many times as Lance Armstrong.Hi. My name is Oliver. Welcome to my website. I wrote The Dreamers for NaNoWriMo. I self-published it after a LOT of editing, re-writing, and revising. The rest is history.I have also played the piano since I was 7 years old. Below is a video of me playing my favorite song by Jon Schmidt and Steven Sharp Nelson, (The Piano Guys) entitled, Love Story Meets Viva La Vida. It mixes Taylor Swift's Love Story with Coldplay's Viva La Vida. If you haven't seen the actual video... you really should check it out!

Posted by Holly Michelle at 5:30 AM